The Richfield Springs branch of the Lackawanna Railroad in central New York has its origin as the Utica, Chenango and Susquehanna Valley Railroad built in 1868. The line was absorbed by the Lackawanna Railroad (DL&W) in 1870 and provided freight and passenger services through the early years of the twentieth century. The DL&W merged with the Erie Railroad in 1960 to form the Erie Lackawanna Railway Company (EL) with the now merged railroad providing “freight service only” to customers in the three county region served by the line. In 1974 the EL sold the branch to the Central New York Railroad Corporation (CNY) of Cooperstown, New York. The CNY continued to provide freight service on the line into the early 1990’s.

The track north of Mapledale Road to Richfield Junction in the Town of Paris is owned by the CNY and remains intact and out of service as of 2009. The section of the roadbed between Route 28 and the Elm Street Extension in the Town of Richfield is owned by the Otsego County Industrial Development Authority of Oneonta, New York. This parcel includes the “wye” track used to turn passenger trains in the passenger era.

The portion of the line between the Elm Street Extension and Lake Street in the Village of Richfield Springs is owned by the CNY as of 2009. The terminal property in the Village includes the former CNY engine house built by the CNY in the 1970’s along with the enormous covered coal trestle of the defunct “Ibotson” coal company. The property once had a 24,000 gallon water tank and “crane” used to fill steam engines with water; the footing for the structure remains intact today. 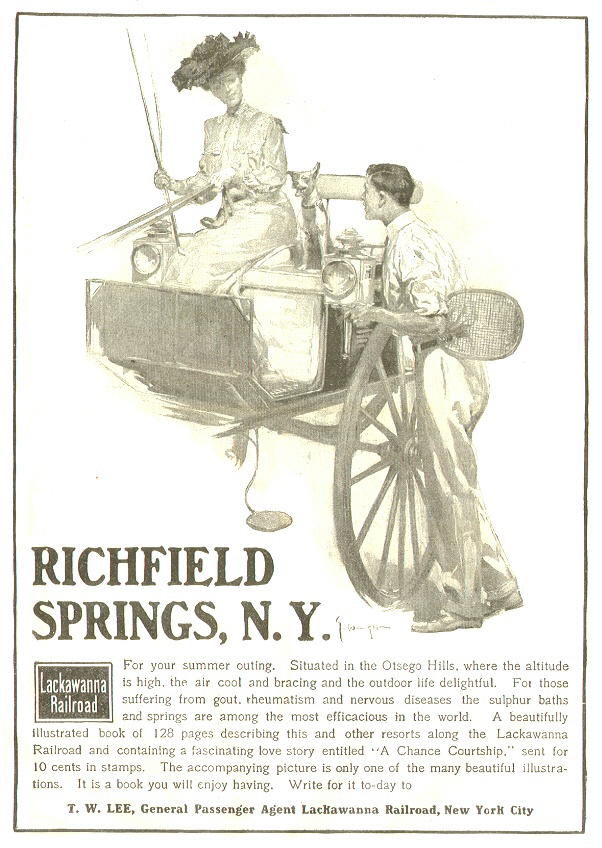 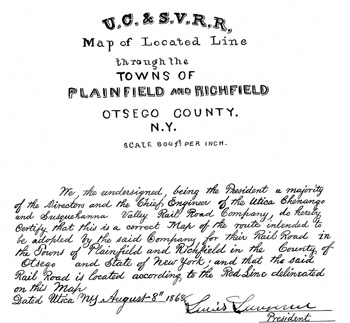 Statement of the President and Chief Engineer for the UC&SV Railroad.

The Station Agent- The East Winfield Station was built sometime around 1902 over 30 years after service on the Branch began in 1870. The Station here and the station at Chepachet (Cedarville) a few miles ahead up the grade to the East were added as the needs of the local populace for Lackawanna rail service increased.

A new Station for Cedarville- Lackawanna Railroad workmen pose for a photograph of their handy work at Chepachet. The new station was built on Chepachet Road in the Town of Winfield to serve Cedarville. The parcel of land the station was built on was purchased in 1903. The station today is a private residence, prior to that it was a bar called “Petticoat Junction” and was a most popular establishment for many years.